As with most charities we rely on the generosity of friends and members for us to be able to organise enjoyable events for the children and their families throughout the year. Here are some examples of how funds have been raised for the club -

5th September 2020
Little Lakes Golf Event
On Saturday 5th September at Little Lakes we had our BDDCS COVID event we had 21 players all raising money for the charity everyone had a great day and the weather was fantastic.
A big thanks to you all for today. Peter Bird, Chairman.

23rd November 2019
Co-Op Rubery
On Saturday 23/11/19 Peter Bird Chairman of BDDCS went to the Co-Op Rubery for the final presentation of money collected by the Co-op members. I would like to thank everyone at the Co-op at Rubery and Turves Green for their support for the charity and its members
Peter Bird Chairman 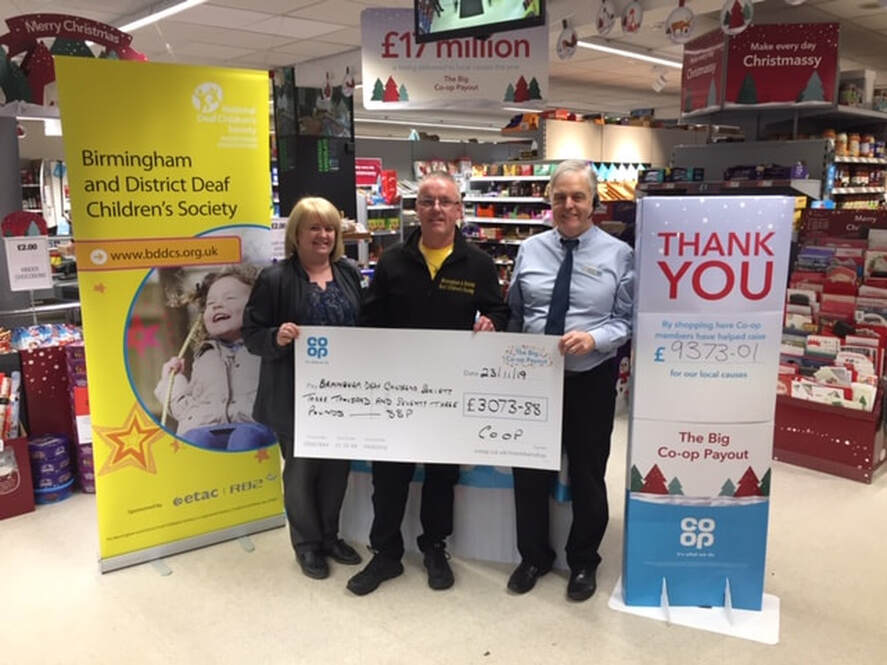 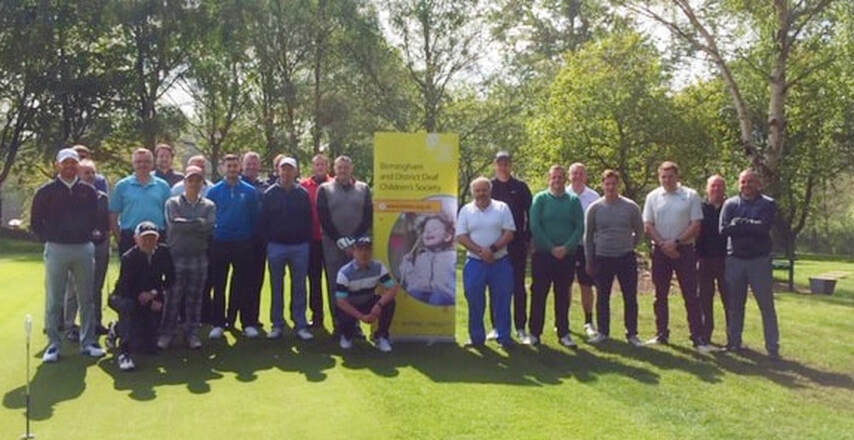 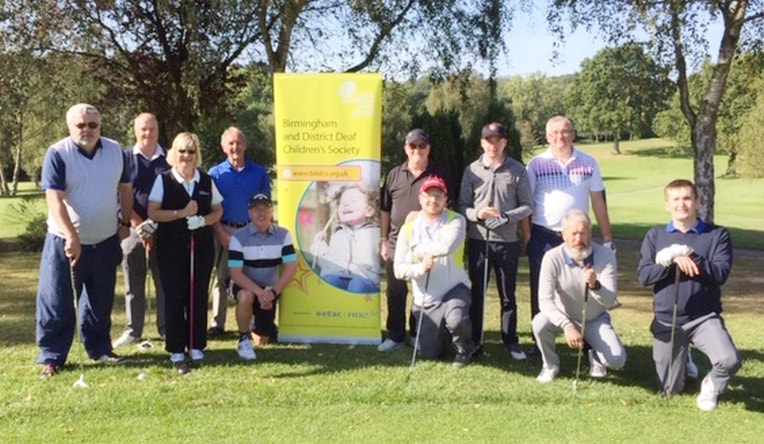 
​September 14th 2019
On Saturday September 14th, at Little Lakes Golf Club, Bewdley, (see photo above) we had our golf event raising money for BDDCS. The weather was fantastic and everyone had a great time. A big thank from me for coming.
Peter Bird,
Chairman
​
May 11th 2019
On Saturday 11th May, at Little Lakes Golf Club we held the golf charity event. 28 people came to play to raise money for the BDDCS. The weather was good and everyone enjoyed themselves. I would like to thank everyone for coming and giving support to the charity.
Peter Bird,
Chairman
​
​September 15th 2018

On Saturday 15th September at Little Lakes Golf Club, Bewdley, we had our golf team event; it was BDDCS against JOHNSONS COACHES. We had 27 people play, the weather was good and everyone had a great time. The BDDCS team won (hurray!) and we raised £205.00 for the Club funds.
I would like to thank everyone for playing and raising the money for the Charity
Thank you,
Peter Bird Chairman

May 12th 2018
On Saturday 12th May 26 people played golf at Ombersley golf club to raise money for the B&DDCS. The weather was great and all the players had a good time. I would like offer a big thank you to them for giving up their Saturday to play golf for the charity.

Peter Bird, chairman
September 2017
On Saturday 09/09/17, at Ombersley Golf Club, 26 people turned up to play the team event, Johnsons Coaches against BDDCS. The day went well, everyone had a great time and we raised £213.00 for our funds.
Peter Bird the chairman would like to thank everyone for coming and raising the money for the society. Thanks all. Peter 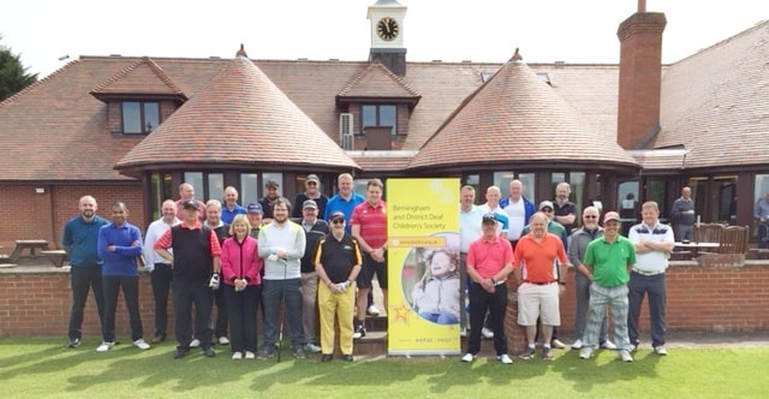 May 2017
On Saturday May 13th at Ombersley golf club it was the BDDCS golf event .We had 31 people playing golf and they all had a great time. We also had a raffle which raised £221.21. This will increase when sponsorship money raised by some of the players has been collected. Thank you all for giving your time up to raise money for the charity. Peter Bird, Chairman. 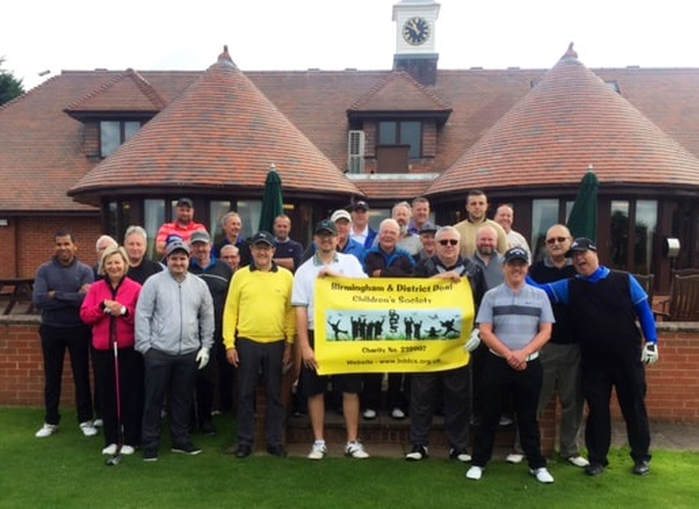 ​April 2017
On Saturday 22/04/17 Peter bird, chairman of the BDDCS, went to the Co-op stores at Bearwood & Harbourne, Quinton and Handsworth Wood for photos with the managers. Members of these stores nominated our society for funding, the total raised was an amazing £3,530.80. Thank you Co-op and well done to the committee for their help and support going to the stores. For some photos (click). 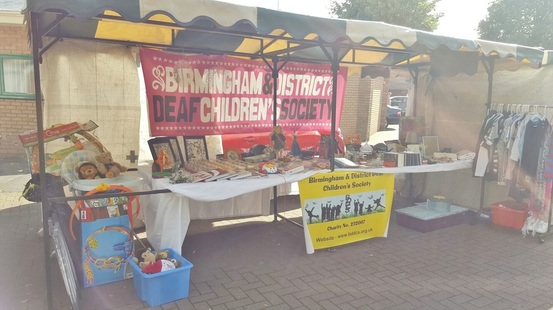 Jessica's Fund Raising Stall
On the 30/07/2016 Jessica, one of the bddcs committee members, did a fundraising stall at Kingswinford. She had a great day and raised £62.11. So well done from the rest of the committee.
Thanks, Peter Bird, Chairman 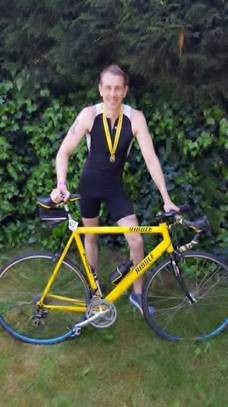 Sutton Coldfield's Steve Smith Completed Three of Three Triathlons on Sunday 24 July at Sutton Park and raised a whopping £700 for the Birmingham region of the Deaf Children's Society.

Steve Smith, 39, father of two; Evelyn, 4 and Quinn, 1 and partner to Kelly decided he'd put himself under significant pressure and challenge himself physically to complete three triathlons in three months to raise money for a charity very close to his heart.

Quinn, a one year old happy little boy, was diagnosed as profoundly deaf at just two weeks old in July 2015 and without any history of deafness in the family it came as a huge shock to both Steve and Kelly.

"After the diagnosis, our family were in complete darkness and confusion. We didn't know what to do or where to go and what would happen. However, we are very fortunate to have a significant support service for Birmingham's City Council's Sensory Support Service and we were also put in touch with the regional division of the Deaf Children's Society.

"At just six weeks old, we met some incredible families, Deaf and Hearing Parents with deaf children at an event ran by The Birmingham Deaf Childrens Society and we knew everything would be OK. But, it was apparent that these events that bring our families together only happened if significant funds could be raised. With that in mind, I decided I'd raise some money myself. Not sure what to, I foolishly decided to put myself forward to complete three triathlons in three months. A novice athlete, without any prior experience of outdoor swimming or cycling (I didn't even own a bike!) I'm quite surprised I completed one - never mind three!"

Steve, a financial analyst for high street retailer Claire's Accessories, completed his first triathlon earlier in the year in Northampton, then another at Ragley Hall in June and finished his challenge at Sutton Park. Proud of his achievements both physically and charitable, Steve can now hang up his triathlon gear, hand over a £700 cheque and concentrate on the future of his deaf son Quinn, who will have life changing surgery on 2nd September- bilateral cochlear implant surgery.

The monies raised will contribute to events to bring together families with deaf children across the city and have already provided a significant life line for Kelly, Quinn's mum who attends local events often and shares her experiences with other families.

Kelly Ruston, Steve's partner, and Quinn's mother adds: " attending these events are more than just dates in the diary and time fillers. These events are for parents like us, parents with deaf children who require that little bit of extra care and support than their hearing peers. It's a chance to share your feelings, an opportunity to realise you're not alone and more importantly for the children a realisation they're not the only ones deaf. Especially as the national average of deaf children being born is 1/1000 yet Birmingham has almost 4/1000 and predominantly to hearing parents like us.

"I'm incredibly proud of Steve completing three triathlons and raising £700 for a charity very close to our hearts and family. It's an incredible achievement."

Peter Bird the BDDCS Chairman said "The committee  of the BDDCS and myself would like  to thank Steve Smith for his hard work and a lot of will power doing 3 triathlons and raising a fantastic amount of £700, thank you"

​Love Brum Award July 2016
On Tuesday the 5th July Chairman Peter Bird was presented with a cheque for £2000 from 'Love Brum' (a Birmingham based charity - http://lovebrum.org.uk/).
Peter said "I was contacted by Love Brum and asked to make a video featuring the work done by Birmingham and District Deaf Children's Society.
This video, along with several from other Birmingham based charities, was shown at a charity evening and the members of Love Brum had to vote on videos presented by three finalists.
I am delighted to report that BDDCS won and was presented with a cheque for £2000."
Your website editor says "Well done Peter and all those who were involved in making and presenting the video. What a huge difference this money will make in terms of funding events for the club's members."
​Here are a couple of photos showing the award - 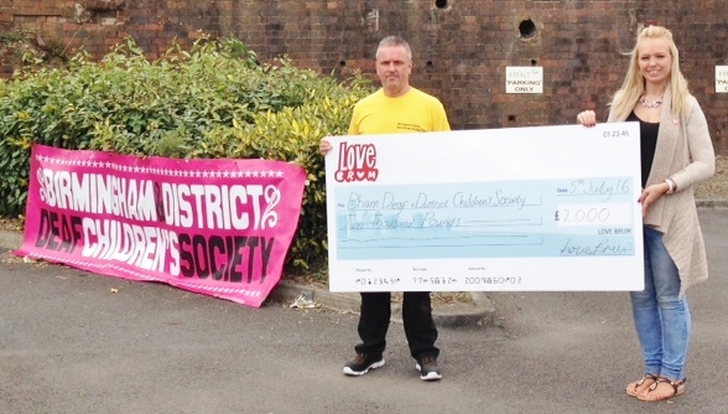 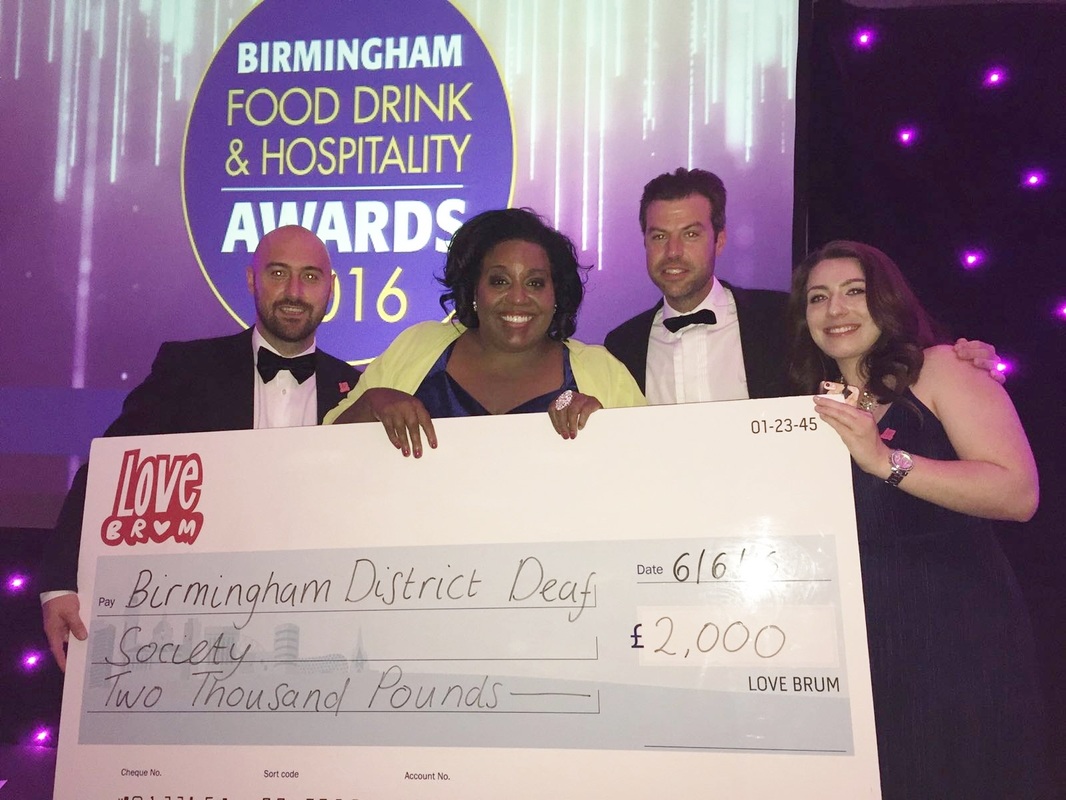 "On Saturday 10/09/16 at Ombersley golf club the BDDCS played a team event against Johnsons Coaches.  24 people turned up to play, the weather was ok and all players enjoyed the day. We raised £156.00 and the BDDCS won the event. A big thank you to everyone for coming and raising money for the society."
Peter Bird, chairman 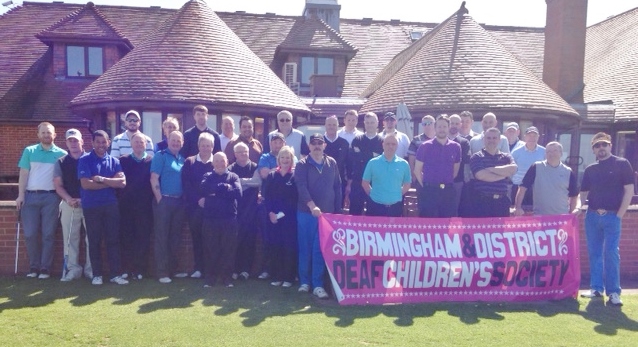 The BDDCS held its first Golf event of 2016 at Ombersley Golf Club on Saturday 14th May.
An amazing 31 people attended with two main objectives in mind 1. to enjoy a good game of golf in brilliant weather and 2. to raise money for the BDDCS.
​Both objectives were achieved with honours.
Peter Bird sends his thanks and appreciation to all who supported this event either in person or by sponsorship. 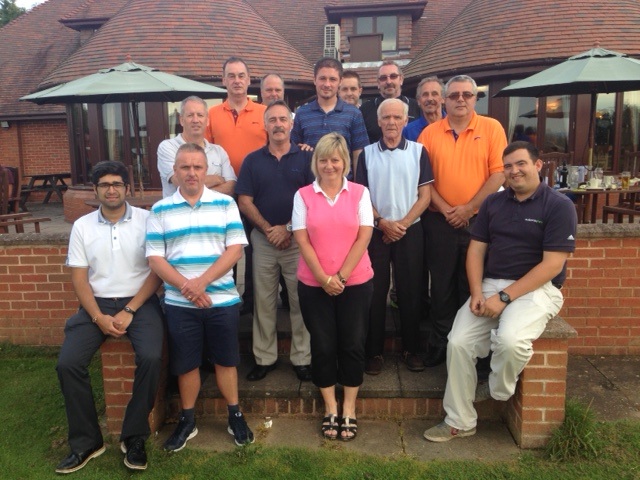 Saturday 12th September at Ombersley Golf Club
We had 23 people playing in the golf team event some for B&DDCS and Johnsons coaches they all enjoyed the event and the weather was great the b&ddcs won the event and we raised about £200.
Peter.

About 44 people turned up to play and raise money for B&DDCS.
The weather was kind to us and everyone had a great day as you can see from the photo below.
We raised about £800, this came via a raffle and sponsorship money and I still have additional money to collect.
Many thanks to all who played and made the day such a great success in every way.